Gold and gold jewellery and even the beginning of the desire to have – own or be adorned by gold or gold jewellery can be traced back over seven thousand years.  The Roman period of goldsmiths can be seen from texts and pictorial evidence and the introduction of precious metal i.e. gold or gold coinage date as far back as 600BC. 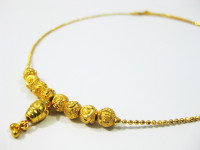 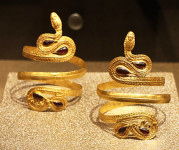 The ordinary layman would be keen to buy gold and jewellery and gold jewellery and in the sands of time proof of this is found in Egypt as well as Mesopotamia.

This can be traced by way of such artefacts as the Papyrus documents which illustrate aspects of life in Egypt in the Roman period.

It is fascinating to realise that the man in the street purchased gold as well as jewellery and this can be cross referenced by documents of that time.  One clear example of that period is a purchase order for a pair of coiled gold snake armlets by a customer and specific historic documents confirm that money was exchanged and given directly to the goldsmith for the purchase of the gold.

Elaborate gold jewellery also dates back to Sweden from the sixth century AD as well as work from Pompeii where funerary was made in gold, although not an everyday style but more so as gold necklets, gold rings, gold earrings as well as gold snake rings were around that period.

It has to be mentioned, gold was all the fashion, more so then as garments of jewellery worn by humble people to pieces shown in the Byzantine period and earlier.

It is remarkable that gold jewellery was probably more fashionable then for decorative reasons.  A typical example of this is of a seven thousand year old necklace which was excavated in Arpachiyah, modern Iran.  This necklace was made from part of Obsidian a natural black glass which was extremely rare and naturally volcanic, so to polish it in those days considering what tools were available is even more remarkable. Again it was the gold that became the focus of jewellery and there were huge amounts available.

During the period 730-843 AD techniques such as filigree and granulation were often used.  Filigree was an intricate openwork often used in  Byzantine brooches. It is also worth mentioning that silver was also treated as an equal metal in some areas.

Some of the oldest pieces of gold jewellery which have stones in them, have been found in Babylonia and in places such as the tomb of Queen Pu-Abi where the jewellery dates back to 2,500 BC. This was discovered as recently as 1922-1934.  The gold was of extremely high quality as well as being diverse in designs, with some pieces made of pure sheet gold. i.e. gold earrings, fine gold necklaces and some pieces inset with lapis lazuli, cornelian as well as agate.

There have been many remarkable discoveries of early jewellers, one of the most remarkable was a sealed jar dating from 738BC. Within the jeweller’s box of tools were gold jewellery, lapis lazuli, scrap silver, gold weights, and a seal giving the name of the original jeweller.

This box was found in his workshop and is the only evidence in the ancient world of a named jeweller.  The site of the workshop was situated in a temple in Larsa (now part of Iraq).

I will be returning to the subject  of gold jewellery the history, design, fashion and influences in my next editorial.

I can't thank Vernon enough, and would certainly recommend him to anyone considering the sale of jewellery and antiques.

After trawling the internet for information on the best way to value (and ultimately sell) a number of items of jewellery that were left to me by my late mother, I found myself at a complete impasse - High street jewellers wished to charge a set fee for a valuation on each item, which could easily have exceeded the eventual sale values. Feeling rather lost, I happened across Vernon's website and contact details.  Sending a message, resulted in a swift and courteous telephone reply from Vernon.  We had an extremely helpful conversation, which left me in no doubt that Vernon's knowledge and expertise would be invaluable in assisting me with the sale of the jewellery. I travelled from Berkshire to Vernon's office on the outskirts of Brighton, and had a delightful meeting with the man himself and his lovely colleague Hayley.  During the meeting Vernon was very honest and concise, and I elected to have him sell the jewellery, which he did over the course of the following 10 days. I consider myself very lucky to have happened across Vernon, when other avenues appeared to be unsuitable for my particular situation.  I can't thank him enough, and would certainly recommend him to anyone considering the sale of jewellery and antiques.

Having recently inherited some jewellery and with no idea where to start looking at it (is it real, fake, good quality, desirable, saleable, etc), I visited Vernon as part of a pre-arranged, Covid safe, free valuation. I was unsure what to expect for free, but I needn't have worried. Vernon was friendly, very efficient, and the perfect combination of professional and courteous. He quickly sorted the jewellery, provided guidance as to value, some information about styles and age, explained how any sales process would work if warranted (which is very transparent and easy) and all with a general background conversation which left me enthralled and relaxed. As a free valuation service I can't recommend him highly enough and I will definitely be visiting him again when I choose which items I wish to sell.

After sending images of our inherited gold coins and jewellery to local jewellers we were told they were of little interest and value. We then found Vernon and on instructing him to sell our unwanted collection we were overjoyed with the figure he achieved on our behalf which was by far and above the quotes we had been given previously. Vernon worked very hard for us to achieve this excellent result. His communication was both timely and reassuring keeping us informed at every stage of the process. Anyone finding that they have similar items like us would be well advised to use Vernon's services which are completely private & confidential with very reasonable cost effective charges.